Ahhhhh, the first episode of Emergency Couple is finally here.  The build up was intense, and it began with Oh Chang Min (played by Choi Jin Hyuk) rockin’ the heck out of that wedding suit, and all smiles.  Oh Jin Hee (played by Song Ji Hyo) looked beautiful in her wedding dress, and these two give new meaning to “quickie wedding”.  Oh, just walk into your church, hand the pastor a note to read from and that’s it.  Well at least that way it’ll keep the wedding costs down.

Chang Min and Jin Hee appeared to have gotten married against every one’s wishes.  The consequences of this grave decision, was no more help from the family to pay for Chang Min’s medical school.  Now, after dropping out, he’s just a frustrated pharmaceutical sales rep with an attitude.

Fast forward past both of them whining to their doctor about the stress of their marriage; his night out with drinking, being groped and table top dancing; her cooking and fighting to survive the dinner prep.  The welcome home, “honey-how-was-your-day” brutal redecorating session was about to begin. He walks in dripping wet from his drunken meet ‘n greet and delivers a dry “I’m home” and an even less enthusiastic “get me a towel”.  What a way to set the mood for a fight of the century. Destroy the limited edition speaker? Check.  I can hear all men screaming.  Annihilate the expensive channel bag that is still being paid for? Check.  Women every where were weeping.  Unintentionally kill the fish and the fish tank?  Double check.  Who gives a damn about fish when your heart is trying to check out early?

Frustrated much, you two?  This show should be called “Why Did I Get Married To Him/Her”.  Six years later they bump into each other at a mutual friends wedding, one as the singer, the other as the pianist.  Chang Min is still rockin’ the heaven out of a suit, and Jin Hee is still wearing the same dress from her wedding day.  Not Good, but at least she still fits in it 6 years later, and it’s clear they still despise the ground each other walks on.

Jin Hee is so ruffled by the meeting with Chang Min, she drinks herself right into an emergency room, complete with tubes down her throat. There’s the handsome and confident Doctor Goo Chun Soo (played by Lee Pil Mo), AKA “Devil” who treats her drunken comatose state, so she doesn’t drown in her own….well you get the picture.  Meanwhile, Chang Min and his class mates are on their way to checking in to their first day as newbie interns at ~suprise~ the same hospital where Jin Hee is definitely going to have her guaranteed hangover.  There’s just one little thing.  The mean ole’ chief resident “Devil” is role calling all the interns, and calls Jin Hee’s name, in ear shot of Jin Hee lying in the hospital bed and Chang Min, who thinks his ears is playing tricks on him. 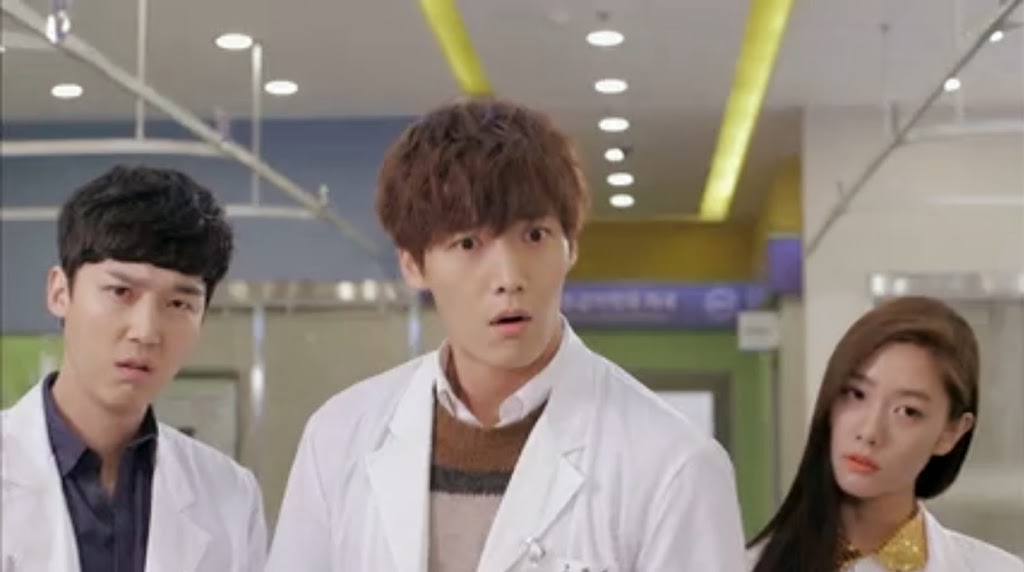 By the time Jin Hee stumbles clumsily onto the line up, with crazy hair, old wedding dress, drunken vomit and all, Chang Min and Chief “Devil’s” mouths are both hanging on the floor.  Chief “Devil” just revived this girl from the doors of death, this is going to be his intern? Chang Min was probably hoping he was dead the moment he realized he’s interning with his dreaded ex wife, how in the heck did this happen?

This episode is the perfect foundation for the internship from hell – for either Jin Hee or Chang Min.  Heck, even for the rest of the interns.  Episode 2 should be very titillating.  I’m sticking around for this one.  Even with all his high pitched girlie screaming, Choi Jin Hyuk is still the cutie patootie to watch.